Are Divorce Records Public in Georgia? 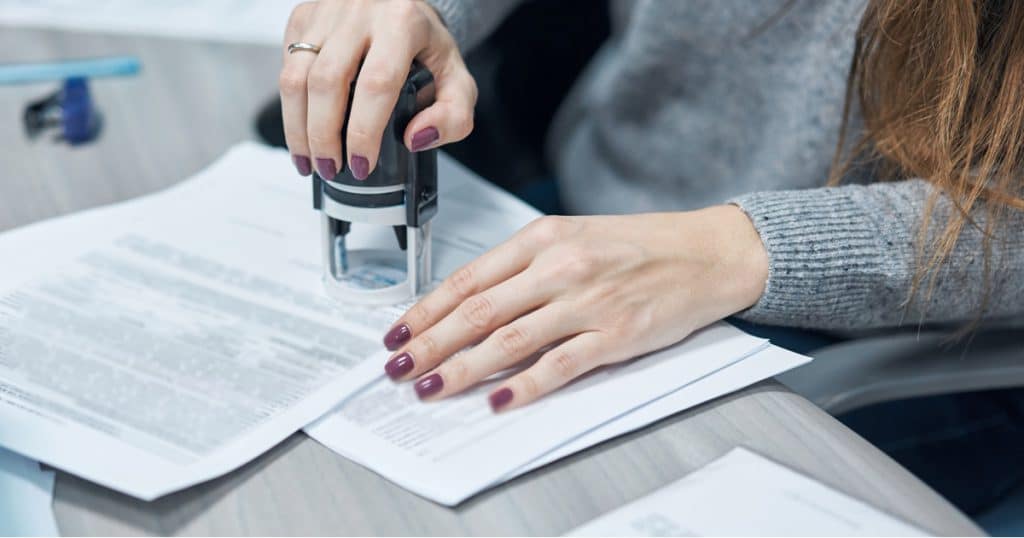 The formerly married hosts of a television show, Flip or Flop, recently surprised fans by deciding to continue working on their show together despite the end of their marriage. The couple became yet another example of a high-profile divorce consuming the news and the minds of curious third parties eager to know the private details of the dissolved marriage.

While the average divorce does not inspire nearly as much interest, some parties may be curious about the reasons surrounding your divorce. The internet has made it easy for virtually anyone to find out your private details, leaving many wondering if divorce records are public in Georgia.

As of now, it is possible to search Georgia divorce records publicly. Any person who wants to know about your divorce has the legal right to perform a search and obtain details about it. While this might come as a surprise to many, Georgia has not sealed many court records for years. For this reason, it is important to remember that, when going through a divorce or any other major legal life change, it is possible that your information will be accessible to anyone with or without your express consent.

Requesting that Your Records be Sealed

However, during a divorce, you may request that the court seal your divorce records.  In order for the court to do this, it will need a substantial reason or reasons showing that if the records are NOT sealed, there will be harm to either or both parties.  The difficult thing is proving to the court what is actual “harm.” There is no clearly defined rule as to what is harm, but it must be beyond mere embarrassment. Below are some scenarios which discuss what may or may not be harm:

Scenario 1:  The husband has an affair.  His wife discovers the affair and sues him for divorce under the grounds of adultery.  He doesn’t want the fact that he had an affair to be known and seeks to have the record sealed.  The husband would likely not succeed since he would probably only suffer embarrassment and not harm.

Scenario 2:  Assume all the same facts as Scenario 1, but in this case, the husband is a well-known preacher of a large church. His flock views him as an upright and moral man.  The husband states to the court that revealing the details of his affair would damage his reputation, lower his standing amongst his churchgoers, and reduce his ability to provide for his children and soon-to-be-ex-wife.  Although there is no way of knowing for certain if the court would approve of having the records sealed in this case, there is a stronger chance the court will because there is a chance of economic harm, not just to the adulterer, but to the faithful spouse.

Scenario 3:  The husband has physically and sexually abused his wife.  She files for divorce under the grounds of cruel treatment and seeks to have the records of this divorce sealed.  She would likely succeed in having the civil records of the divorce sealed because courts generally try to protect victims of crimes, to include limiting the number of sensitive facts about them in public records.  Any criminal records in the case could be sealed as well.

In all cases, there is a higher chance that the records in a divorce will be sealed if both parties jointly request that the court do so.

How Divorce Records are Obtained from the Office of Vital Records

First, a person must be sure the divorce being researched took place during a time period that the State Office of Vital Records can confirm. Currently, only divorces in Georgia that took place between June 1952 and August 1996 can be confirmed. If the divorce took place within that time frame, complete a divorce verification request and provide the state with a copy of a valid photo ID. A search fee of $10.00 will be charged. Requests can be made in person or via mail.  When made by mail, allow eight to 10 weeks to receive a response.

How Divorce Records are Obtained from the Clerk of Superior Court

If a divorce took place after August 1996, the Clerk of Superior Court in the county where the divorce took place must be contacted. The Clerk is able to conduct a record search at the request of an interested party. Some counties have made it possible to complete record searches online, but it may still be necessary to go to the Clerk’s office of the Court, fill out a request, and pay a search fee in person.

For example, the website for the Cobb County Superior Court Clerk’s Office allows users to access civil filings such as divorce.  This website and others similar to it allow people using the site to search civil filings by party names. Therefore, if a person so desired, they could find the divorce filings of any person who filed for divorce in Cobb County by entering their name in the search tab.    Below is a screen capture of the Cobb records search website, which can also be accessed on a mobile device. 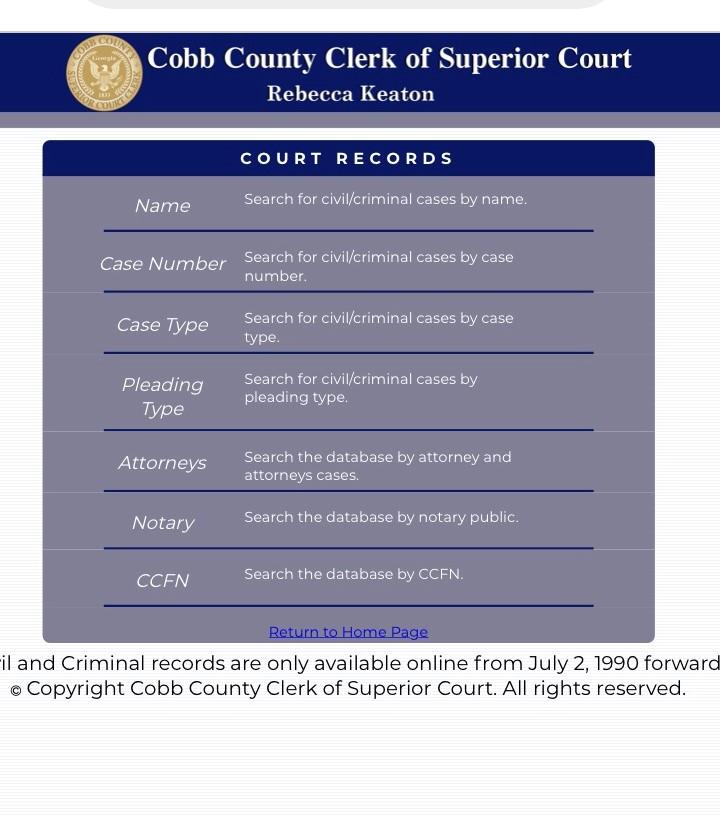 Other counties have similar search features for divorce filings, but a person is either required to register for an account or be an attorney to access their sites.  Still other counties, such as Fulton, will list on their clerks’ websites the title of each filed document in the case but does not allow a person to read actual documents online.  To obtain them, a person would have to physically visit the Clerk’s Office of the Superior Court.

Counties with websites that allow a user to view, download, or print divorce filings often have restrictions on certain documents preventing them from being accessed online.  For example, Cobb County’s website does not allow a user to view a filed Domestic Relations Financial Affidavit (DRFA) since this document contains a significant amount of personal financial information.  Other documents listing Social Security numbers of the parties or their children may also be restricted. Finally, documents related to family violence, such as temporary protective order filings, or documents related to issues regarding minors, are often restricted.  Some documents are so protected they will only be reviewed by the judge in their chambers. An example of this would be juvenile court records which have been subpoenaed in a divorce lawsuit to support accusations of child abuse.

In addition to the restrictions listed above, parties are now directed to list only the years of birth rather than the full dates of birth for their children on court filings.  This is to help prevent identity theft.

As stated above, a party in a divorce lawsuit can increase the likelihood of having the records sealed if they can get the other party to agree to it.  It may not hurt your case to make a request to your spouse to jointly petition the court to have the records sealed.

Also, the earlier a request is made to have the records sealed, the more likely it is to have that request granted.  Waiting until after embarrassing or harmful set of facts have been revealed in court to file a request to seal the records can seem like a “cover-up” rather than an effort to prevent harm.  Because it is generally better to be upfront and honest with the court, an early disclosure and request may convince a judge to grant your request.

Finally, the sooner a case settles, the sooner it is closed.  The sooner a case is closed, the less likely it is that certain accusations and facts will be revealed.  Therefore, if you settle your case early, there may not be a need to have the records sealed. Obviously, settlement is not an option in all divorce cases.  However, it should be considered whether or not accepting an offer from the other party is worth it to keep harmful facts private. The pros and cons within that type of scenario can be discussed with your attorney, who can help you make a decision about what would be best for you.

If you are concerned about privacy issues in your divorce, the attorneys at Stearns-Montgomery & Proctor can assist you in filing the proper motions with the court to request that the records be sealed.  In addition, there are a variety of reasons you may need legal verification that a divorce has taken place. Even though Georgia allows anyone to search public records to obtain this information, it is not unusual to experience difficulty or delay when trying to get a copy of divorce records. If you are having trouble getting proof that a divorce occurred, the law offices of Stearns-Montgomery & Proctor can also help. Call us today to schedule an appointment so that we can talk about your concerns and help you determine the best way to proceed.