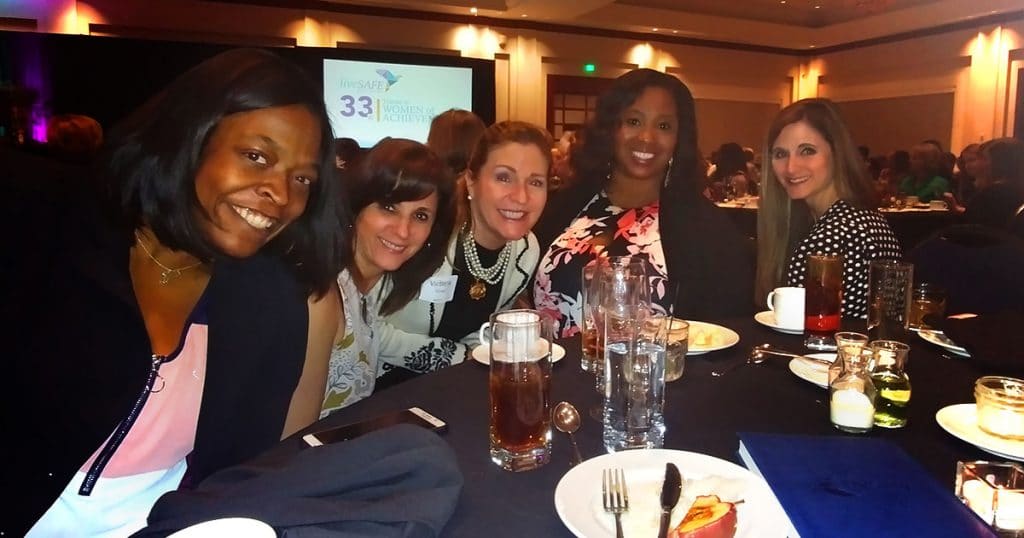 Women from Stearns-Montgomery & Proctor recently joined more than 700 community leaders at the LiveSAFE Resource’s Annual Tribute to Women of Achievement. The Academy of Women Leaders created the annual awards program to honor women who exemplify the qualities of leadership, achievement, dedication, and generosity.

For over 33 years, more than 500 women of business, community, and leadership have been recognized for their achievement, generosity, and willingness to inspire success in others.

Marietta Mayor Steve “Thunder” Tumlin and wife Jean Alice served as honorary co-chairs, while George Hartzog and Kim Gresh served as co-chairs for this year’s Tribute to Women of Achievement. Annually, local women leaders are nominated and selected for that year’s recognition and induction into the Academy of Women Leaders.

At the tribute, Missy Owen, co-founder and CEO of the Davis Foundation, was named Woman of the Year for her efforts in the community. The title recognizes her distinct leadership style as well as her expertise in balancing business, community, and family.

Shana Pennywell, an attorney at SM&P, shared her thoughts about the event. “Being able to attend a gala highlighting the outstanding achievements of women in the community was an honor,” she said. “It is impressive to see the leadership shown. No one could come away from this event without feeling inspired and motivated to be excellent stewards of our community.”

Attorney Danielle Davis was impressed with the efforts of liveSAFE Resources as they work towards eliminating domestic violence, sexual assault, and elder abuse.

Tuchman also shared that being a part of the Academy of Women Leaders gives members a platform to continue to shape communities and be a part of the development and mentoring program for future female leaders. The Academy also acts as an influential voice in the community at large, supporting the work that LiveSAFE Resources does to make a difference in the lives of women.

Past winners have come from all walks of life with diverse career paths and ethnic backgrounds. They have helped and mentored one another selflessly in an effort to ensure that each one is a strong contributor to the Academy of Women Leaders. Women from Cobb, Cherokee, or Paulding counties are eligible to receive this honor.