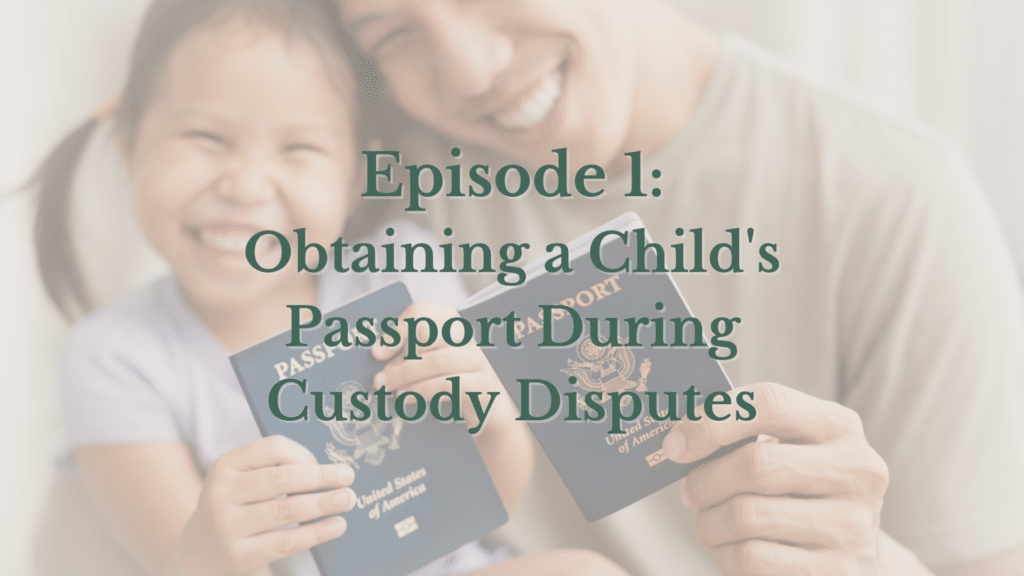 In this premiere episode of our legal podcast, we discuss issues surrounding obtaining a passport for a minor child when parents are divorced. Listen now.

Transcript of Episode #1: Obtaining a Child’s Passport During Custody Disputes

Mary Montgomery: Hello everyone, this is Mary Montgomery of Stearns-Montgomery & Proctor in Atlanta, GA. On today’s podcast, I had a great telephone conversation with my colleague Hallie Willis, an associate attorney in our Marietta office. We discussed some of the complexities in obtaining a passport for a minor child when the parents are divorced. We hope you enjoy the conversation and gain some insight into how to navigate this situation if you’re faced with it.

MM: Hallie, this is Mary Montgomery. How are you today?

Hallie Willis: I’m well, Mary, how are you?

MM: Very well, thank you. Today I want to talk about getting a passport for your minor child when the parents are separated. Can you help me with that?

MM: Okay. Tell me — if you have a client with primary custody of a minor child, will they be able to travel out of the country with this child?

MM: Going to apply for the passport is where you’re gonna get stuck is that what you’re saying?

MM: Okay, got it. And so, what obstacles might the primary custodian encounter when trying to get that passport or that application filled out with the other parent?

HW: If they have primary custody or are the sole legal custodian, then the parent goes to apply for the passport. There are a couple of different things that the primary custodian can show, and one of those is an order from the court granting that parent’s sole legal custody. Now, it gets a little bit more complicated. If there is an order saying that even if the parent does not have full legal custody, regardless, that parent can get the passport without the consent of the other parents. But you will have to show the Passport Office some documentation showing that you were able to obtain that passport without the consent of the other parents.

MM: So would it be sufficient just to have sole custody? Or is that not sufficient? You also have to have the courts add additional language that says that this sole custodian can take the child out of the country, or is having full custody enough?

HW: Having full custody will be enough.

MM: Okay, but if you just have primary custody in a joint custody situation, then you’re saying having language in the order that says you can apply for a passport on your own — that is sufficient.

HW: Correct, and that is something definitely parents need to consider if they are going through a divorce and if they have family outside of the United States. Go ahead and include that language in the divorce decree and parenting plan that both parents should cooperate in obtaining the minor child’s passport should they decide to do so, especially when you’re sharing legal custody. You know, it would be an extra safeguard for parents who have full legal custody regardless in that divorce decree or parenting plan to go ahead and include that language, so there’s no question when that parent decides to go apply for the passport that he or she has that ability to obtain that passport.

MM: So it makes a lot of sense then to make sure you address this issue, so even if you don’t have family in another country and — certainly, especially if you do — but if you want to travel, let’s say with your new spouse or family or just separately, you’ll need to make sure that your child has a passport. And getting both of the parents, if they are separated or estranged from one another to go down to the Passport office to fill out all the paperwork, is not an ideal situation. But what if in negotiation, say, the other parents if they have joint legal custody, are like, “Well, no I’m not willing to just give them carte blanche that they can go down and get a passport whenever they want?” If the parent has joint custody, but the one other parent is not a primary, but if they don’t want to do that, what then?  What can you do in the order? What can you do to get around that?

MM: Yes, definitely. You’d want to do that, order some type of cooperation. So what if I have gotten that divorce and I wasn’t thinking about it at the time, or if I’ve gotten separated, you even have not been married and there’s nothing that is said, and the order is silent? If the final parenting plan and the order are silent on this issue, what’s my next recourse of action?

HW: Sure, at that point, you could file a modification of that order in order to include some language in there. You know, if you needed to take legal action, there’s also a possibility you might be able to apply to court and petition to have the court issue an order stating that you don’t need the other parent’s consent on that. Those are two legal avenues if you are unable to get the other parents to cooperate. Now, I have had in the past, when the situation has arisen, just written a simple demand letter from an attorney, and sometimes that simple act can kind of push the other parent to start cooperating. So that’s definitely something we could help you out with, or a client with, if they did encounter this and were willing to or needing to go for the actions to file actual modification. And if there is language in the order that includes that kind of general language we’re talking about with regards to cooperation, the client or parent might have paid for contempt as well if the parent is not cooperating.

MM: So it sounds like the letter from the attorney might be a good place to start because the other parent would then have to decide whether or not they want to get embroiled in some kind of litigation at that point.

HW: Sure, yes, if all parties are now here in Georgia, but you still have that order and you don’t have any other ties to that state any longer, the jurisdiction over that order could be domesticated, or the order could be domesticated here in Georgia so that we would have jurisdiction over it. And in tandem with that domestication, you could include a modification as well in order to be able to, you know, have the Georgia Court have authority to be able to alter that order that you had in a different state.

HW: Sure, we also need to consider where the child is. If the child is here with you in Georgia you may be able to modify this under the UCCJEA. But if the child is still in the other state, you’re going to have a little bit of difficulty getting jurisdiction here in Georgia. At that point, I would recommend that you at least give a call to an attorney in the state where the child and the other parent reside.

MM: Well, that’s very helpful. Thank you so much. I appreciate it!

For more information on child custody, divorce law, and more, contact an attorney near you today.