Podcast Episode #2: Does Signing a Birth Certificate Legitimize a Child in Georgia? 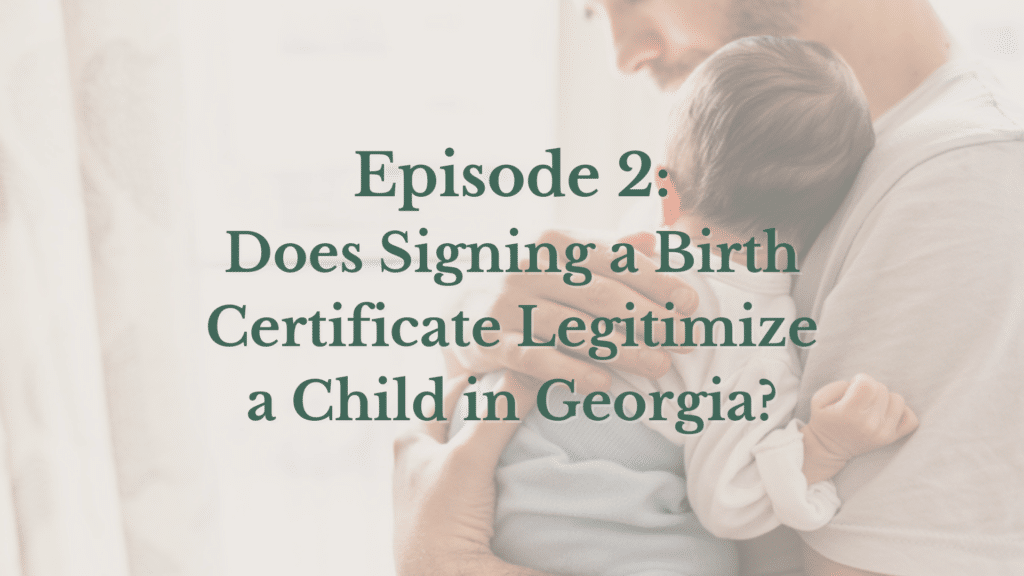 In our second podcast episode, we discuss whether or not a signed birth certificate impacts legitimation, and whether it’s a good idea for an unmarried father to discuss legitimation with the child’s mother.

Transcript of Episode #2: Does Signing a Birth Certificate Legitimize a Child in Georgia?

Mary Montgomery: Hello everyone. This is Mary Montgomery, at Stearns-Montgomery & Proctor in Atlanta, Georgia. On today’s podcast, I had a great conversation with my colleague Dominic Jones at Stearns-Montgomery & Proctor. We have a discussion about legitimation and more specifically, the significance of the birth certificate and how that relates to the legitimation actions. So, Dominic, hello, how are you?

Dominic Jones: I’m doing great. Mary, how are you?

MM: Very well, thank you. And it’s a beautiful spring morning in Atlanta, Georgia. So, Dominic, you like to do legitimations?

DJ: I do. I’m a big proponent of father’s rights. I think that it’s very important for fathers to be involved in their children’s lives and to be able to participate in building a bond with them just as any other parent would.

MM: Well, good, good. I know a lot of fathers, you know, they think that they signed the birth certificate and one of their questions is, you know, isn’t that good enough? What have you found on that?

DJ: Well, although it seems as though you should be able to sign a birth certificate, you’re there for the birth and you’re there in the hospital with the mother. It seems as though that would give you all your rights, but it actually doesn’t under Georgia law. Signing the birth certificate is only deemed an acknowledgment of paternity. What you have to go further if you do not, of course, if you and the mother are not married, then you would have to file a petition for legitimation to get more rights such as becoming the legal father, such as having the court award you custody and reasonable visitation.

MM: And so legitimation and custody — are we able to file that in the same action?

DJ: Yes, absolutely. You can file not only to request that petition for legitimation; you can also request that the court make a decision on, whether physical custody, which is where the child is going to physically be with or be in the physical custody of the parent and also legal custody. Legal custody specifically gives you certain rights to be able to make certain important, major decisions on behalf of the child.

DJ: That’s correct. Actually, if you are not married to the mother, as a father, under Georgia law, you have actually no specific rights. So if something unfortunately happens, and either the state or law enforcement is involved, they’re going to request that you show them some type of court order that you have been legitimated and you have custody rights to be able to enforce those rights. So that’s basically the issue if you are not legitimated.

MM: So if I’m getting along with the mom and we still live together with one another, should I file a legitimation action?

DJ: Sometimes I think it really depends on your relationship. I would say that it’s the thing that I would do. If you have a really good relationship, like you said, with the mother, maybe just bring it up because there are some really big benefits to filing for legitimation. So, I would definitely discuss it with her, but regardless of whether she agrees or not, it’s something that’s very important. Because you don’t know what’s going to happen to the future and you want to do what’s certainly within the best interest of the child. Something that’s beneficial to the child is making sure that you obtain your father’s rights and legally, you have either some type of custody or legal award and you’re legitimated to that child. So, it’s definitely very beneficial and it’s within the best interest of the child to go ahead and go forward with that process.

MM: I know when I was practicing, Dominic, that, you know, it’s not like anybody calls your office unless there is a problem. So that’s the first problem. And if there isn’t any problem, the fact of getting lawyers involved, people would take offense to that. The mother might take offense to that. And, legitimation — we could do a legitimation, purely just the legitimation, no custody, no legal custody rights, but typically, if I did have a client who was still living with the mom and on good terms and who could convince them that it was a good idea or the right thing to do, if you will, that we could put in just generally joint physical and joint legal custody rights. If she gets an attorney, that attorney might put some negative comments in her ear. And so that’s where it does get to be not a good place to be, and you have to be very careful on how you broach that subject. So I think in my practice, I know I rarely found anyone who was filing for legitimation unless there was a problem where the parties were separated. Have you found that to be so in your case as well?

DJ: Yeah, most of the time it’s always when something happens when the visitation stops or the relationship doesn’t work, and either she moves out or the father moves out of the home, but he’s still trying to maintain a relationship with his son or daughter. Usually, that’s when they do call. Of course, though, I’ve attempted to least talk to potential clients and say, look, you know, I know that getting lawyers involved and filing a legal action, some people are very hesitant and concerned when that happens. But I always tell them, look, you can discuss a lot of issues that come up in a legitimation case with the mother. And there’s a possibility that prior to filing that she would agree that this is important. And then you can certainly, just like you said, do some very general joint legal custody, joint physical custody, and sometimes parties will say they can still, basically it’s upon their discretion that they can agree on visitation, or they can agree on certain terms. I mean, of course, I always give a recommendation that we need to specify these terms, but if that’s what they agreed to, that’s something that you can at least get a legitimation order, just making sure that if something does happen, unfortunately, that you are there to be able to make those types of important decisions for the child.

DJ: Correct. It’s an act of accepting paternity. It’s certainly not a DNA test, but if the mother tries to deny, or even sometimes the father tries to deny, people can use that as evidence of look, that’s an acknowledgment of paternity. Certainly in a legitimation case though, the father can motion for a DNA test within that legitimation. So, he can also request that in his petition, if there are some concerns or he wants to make sure that the child is biologically his,

MM: If he signed the birth certificate, he still has the right to ask and request DNA.

MM: Well, very good. Well, thank you so much, Dominic. I appreciate your conversation on this. That’s all we have. Thank you.

For more information on fathers’ rights, legitimation, child custody, and more, contact an attorney near you today.