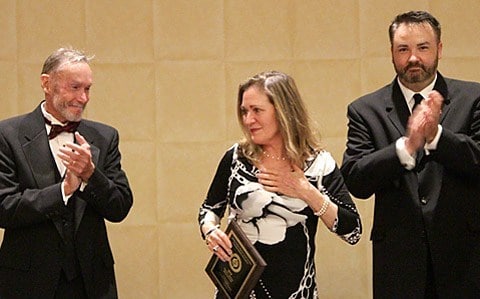 No one except SM&P’s client relations director Victoria Conkel Turney was astonished when she was named the recipient of the United States Marine Corps Combat Correspondents Association’s highly prestigious Donald L. Dickson award at the 2019 COMMSTRAT (Communications Strategy and Operations) Training & Leadership Development Summit’s annual awards banquet in Atlanta last month. (COMMSTRAT is a communication activity that provides timely, accurate information which informs and educates about the missions, organization, capabilities, needs, activities, and performance of the Marine Corps as an instrument of national defense.) Nominations for the Dickson award are restricted to active members who have contributed the most to the USMCCCA.

Victoria, a retired Marine herself, has worn many hats. According to the evening’s master of ceremonies and career Marine officer Fred Lash, her determination to get things done is no doubt the reason she was recognized with the award. An active Association member since joining in the early 80s, she has also been a recipient of Marine Corps Visual Information and Excellence in Communications. She has served on the board, was president of the Association’s Foundation, and has regularly volunteered for convention planning and behind-the-scenes tasks throughout the year.

“I was surprised and speechless, which is a rarity,” said Turney. “Looking back, I wish I would have conveyed to the active-duty Marines in attendance what it meant for me to be a member of the CCs and establish my near 40-year bond of like-minded Marines.”

The Association, she said, is “a valuable networking opportunity to learn and share in fellowship with others from many eras of public affairs Marines. I have made longtime friends because of the CCs, including some I never even served with. That is something other military occupational specialties cannot claim. We indeed have a gold mine in this organization and are so fortunate to have members past and present who believe in our task of telling the story in whatever format as well as providing the support to ‘get it done.’”