Enforceability of Prenuptial Agreements in Georgia 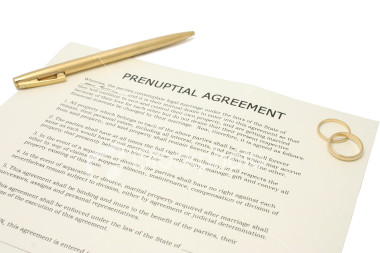 An increasing number of Georgia newlyweds are choosing to sign prenuptial agreements. Although it seems unromantic, this decision often makes sense.  Couples wary of high divorce rates often find solace in a document that can protect their assets in case the marriage is unsuccessful.  However, when considering whether such a document suits your case, remember that not all prenuptial agreements are considered enforceable by Georgia law.  The Georgia Supreme Court dictated three primary considerations for the enforceability of prenuptial agreements in the case of Scherer v. Scherer:

A) Was the prenuptial agreement obtained through fraud, duress or mistake, or through misrepresentation or nondisclosure of material facts?

While Georgia courts have not clearly determined what constitutes these qualifications, there have been a few cases, which have been considered to fall under athis category.  The courts want to ensure that the agreement was discussed between the parties before signing, and thoroughly considered by both.  Whether or not both parties had equal legal representation may be taken into consideration.  If a party has the opportunity to retain legal counsel but has chosen to opt against, the agreement is likely to be enforced.  While there is no requirement in Georgia that a party consult a lawyer before signing a prenuptial agreement, this precautionary measure is highly recommended. A court will also want to determine that there was full disclosure of all assets before the signing.  Any omission by a party may deem the prenuptial agreement unenforceable.

B) Is the prenuptial agreement unconscionable?

The issue of unconscionability is perhaps the most unclear in determining the enforceability of prenuptial agreements, as the word has various meanings and is therefore open to interpretation.  Most often, a court will deem an agreement unconscionable if the “inequity is strong, gross, and manifest”.  The court will most likely examine a spouse’s ability to support him or herself and the assets possessed at the time of the agreement’s execution.  An agreement that provides reasonable support for both parties is more likely to be enforced.

C) Have the facts and circumstances changed since the agreement was executed, so as to make its enforcement unfair and unreasonable?

In determining whether a prenuptial agreement falls under this category, the court will primarily consider whether the agreement is fair at the time the parties are seeking enforcement.  Factors considered include, but are not limited to: a health problem requiring considerable care or expense, change in the employability of the spouse, and changed circumstances of the standard of living of a spouse as a result of the marriage.  The court will not forget the fact that, in some instances, these changes were foreseeable upon the signing of the agreement.

Because Georgia has yet to clarify the determining factors in the enforceability of prenuptial agreements in any concrete way, it is all the more important to seek legal counsel before signing any such document.  If you believe you signed a prenuptial agreement that qualifies as unenforceable under Georgia law, do not hesitate to contact the lawyers at Sterns-Montgomery & Proctor immediately to ensure your rights are protected.