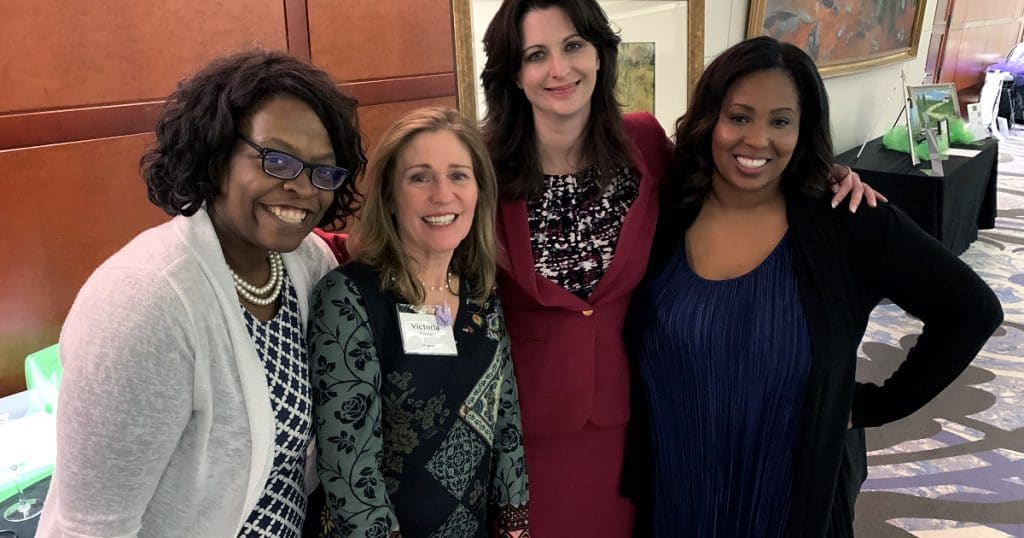 Women from Stearns-Montgomery & Proctor recently joined more than 600 community leaders at the liveSAFE Resources’ Annual Tribute to Women of Achievement. Tracey Atwater, liveSAFE Resources (LSR) Executive Director, noted that the Tribute is the primary fundraising event for LSR, providing critical funding for their programs supporting those harmed by domestic and sexual violence as well as elder abuse. “Sponsors are key to the success of the event. We could not be more grateful for SM&P’s generous support!”

The Academy of Women Leaders created the annual awards program to honor women who exemplify the qualities of leadership, achievement, dedication, generosity, and willingness to inspire success in others. Since the inception of the awards program more than 30 years ago, the Academy has recognized at least 400 women with these outstanding qualities from business and the community at large.

Kim and Michael Paris served as co-chairs, while Mary and Mike Plant served as honorary co-chairs for this year’s Tribute to Women of Achievement. Annually, local women leaders are nominated by their peers and selected for that year’s recognition and induction into the Academy of Women Leaders.

At the Tribute, Rachel Ashe, assistant district attorney from the Blue Ridge Judicial Circuit, was named Woman of the Year for her efforts in the community. The title recognizes her distinct leadership style as well as her expertise in balancing business, community, and family.

According to SM&P attorney Melanie Webre, the event supports a “cause” dear to her heart. “I was genuinely delighted that SM&P gave me the opportunity to attend.”

“Being able to attend a gala highlighting the outstanding achievements of women in the community was an honor,” SMP&P attorney Danielle Davis said. “It is impressive to see the leadership shown. No one could come away from this event without feeling inspired and motivated to be excellent stewards of our community.” The Academy of Women Leaders gives members a platform to continue to shape communities and be a part of the development and mentoring program for future female leaders. The Academy also acts as an influential voice in the community at large, supporting the work that LSR does to make a difference in the lives of women.

Past winners have come from all walks of life with diverse career paths and ethnic backgrounds. They have helped and mentored one another selflessly in an effort to ensure that each one is a strong contributor to the Academy. Women from Cobb, Cherokee, and Paulding counties are eligible to receive this honor.