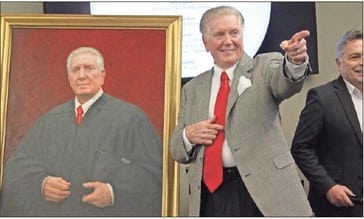 SM&P was honored to take part in the recent portrait unveiling featuring Cobb Superior Court senior judge, G. Grant Brantley. Brantley continues a long and distinguished legal career. The Georgia native graduated from Emory Law School almost 60 years ago, then joined the Air Force as a judge advocate. After his retirement at the rank of brigadier general, he moved to Cobb to practice law. Over the years, he served in a variety of influential government positions.

Judge Brantley has a reputation for always controlling his courtroom and expecting attorneys on both sides to come to court prepared. Former Georgia governor Buddy Darden, according to a Marietta Daily Journal article, said that he knew Brantley to be honest, fair, punctual, and courteous. “He knows the law, but doesn’t think he knows everything.”

Bulgarian-born artist Ross Rossin, who has produced more than 800 portraits of prominent leaders around the US, painted the portrait. According to SM&P’s Victoria Turney, who was at the unveiling, the portrait was well received by Judge Brantley and the public in attendance.

The event was made possible by the generous donations of individuals and law firms such as SM&P who have known Judge Brantley’s capabilities firsthand. “We were pleased to be among those law firms supporting this special ceremony because we recognize the importance of good judges to our legal system,” said Mary Montgomery, founding and managing partner at SM&P.