Podcast Episode #3: How Difficult is Legitimation in Georgia? 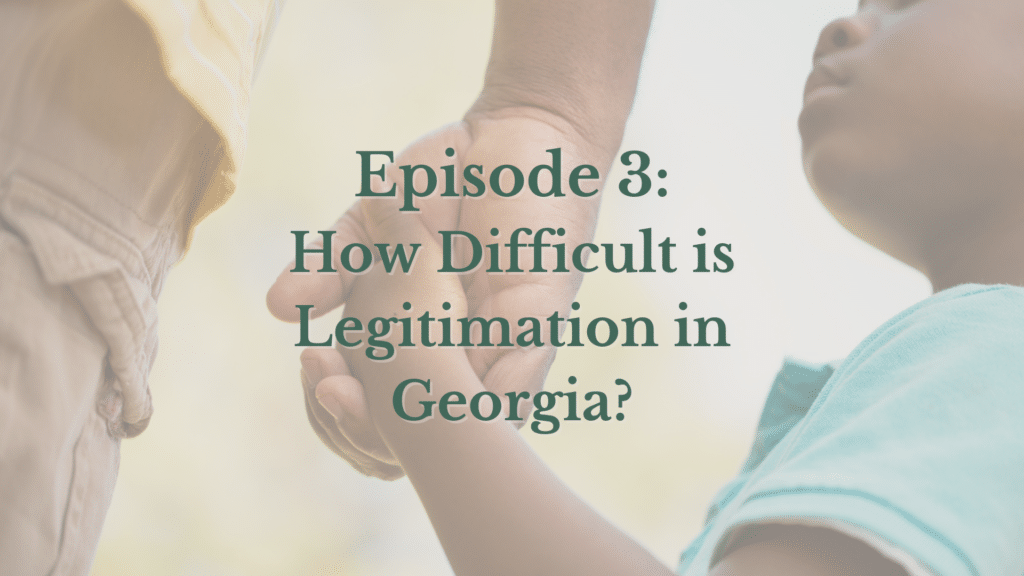 In this episode, Mary Montgomery speaks with attorney Dominic Jones to discuss the legitimation process in Georgia. Listen now or read the transcript below to learn more about what courts consider during a legitimation claim.

Mary Montgomery: This is Mary Montgomery at Stearns-Montgomery & Proctor in Atlanta, Georgia. On today’s podcast, I am speaking with Dominic Jones. The podcast will center around the question of whether or not legitimation is typically granted easily, or whether or not it’s difficult to get a legitimation granted, We hope you enjoy the conversation and gain some insight into how to navigate this situation if you’re faced with it. Dominic, how are you?

MM: Good, good. So, is it difficult to get a legitimation granted?

DJ: In my general experience, they’re not very difficult to get a legitimation granted. Certainly there are two big factors that a court will consider whether to grant or not grant legitimation. But I have never really encountered those issues, but in my experience, there are two issues that a court will consider. And that’s one where, whether the father has abandoned the opportunity to proceed with legitimation or abandoned, not provided any support or has not been around, didn’t sign the birth certificate, has not been in the child’s life prior to filing legitimation — that will definitely be considered, but at the end of the day, it’s up to the, to the judge. Another factor that a judge will consider is the ability or the fitness of him as a possible parent. So if there’s some significant concerns in regards to some criminal issues or past criminal issues that would affect his ability as a parent or his fitness, or maybe even some mental health issues, that’s something that I think it’s also considered, but most times they do proceed with granting legitimation, especially if there has been some I guess evidence that’s been presented to the court that he is the biological father of the child.

MM: Okay. I want to get into those factors a little bit more, but before I do that — the one area that might be sticky is if the biological mom is trying to give the child up for adoption and maybe the biological father is trying to come in and legitimate the child. And so we’re not going to talk about that scenario. Other than that scenario, these are the factors that you’re talking about. The first factor, which was the abandonment or whether or not the biological father abandoned his rights to legitimate the child. Is that right?

DJ: Correct. Yeah, it’s just pretty much if he hasn’t been in contact. I think abandonment is something like there’s been no support, no contact, no communication for at least, I think, six months. That could be a different time, but pretty much abandoned means you just haven’t been in the child’s life at all, has not done anything. A judge can certainly consider that, but that still doesn’t mean that he won’t move forward with at least declaring the father the legal father for inheritance purposes and legal purposes. But that certainly doesn’t give him custody rights or visitation rights, unless the judge goes further and orders that.

MM: That’s good, you can have the child declared to be able to inherit from the biological father, but not necessarily have visitation or custody rights.

MM: And so those things can be separated. So what, what if the father didn’t know that he had a child out there, you know, is this abandonment? Are you having to show sort of an intent to abandon?

DJ: Right. I definitely do think he’d need to show he can disprove that by showing he did know. If he didn’t know that there was a child out there, I think that a judge would at least consider that. Especially if there was just no knowledge that there was a child out there, I think that’s a legitimate reason. But like I said, even though a mother will object to the legitimation and state those reasons doesn’t mean that a judge could overrule that objection and basically grant the legitimation. So I do think that would be important evidence to present to the court that you had that father had no knowledge of the child prior to a certain date. And then he proceeded with filing a petition for legitimation.

MM: Okay, and so with regards to the second factor the fitness and whatnot. I suppose the judge could also separate if they found that he could separate that the child might still be able to inherit from you, you have to pay child support, but you can’t have visitation or custody. Have you found the judges really tend towards more towards granting the legitimation and more towards even let’s say if there’s a stepfather involved or other people involved? And if there is no adoption pending, do judges usually like to keep the biological ties going, if you will?

DJ: They will. In my experience, a judge has always pretty much granted the legitimation. I don’t think I’ve ever from my experience and from my memory ever had a judge not grant the legitimation, but what he will do, if there are those concerns in regards to the father’s parental ability, he will limit his rights to custody and visitation. So if there are some concerns there, then there’s the possibility that he’ll order only supervised visitation or limit his visitation or will still maintain that the mother has sole physical and sole legal custody, but still declare the child the legal child and the father the legal father of the child for those inheritance purposes.

MM: Legitimation really is this totally separate issue from these visitation and custody issues.

MM: Right. So in general, in a more simple case, we’ll just generally talk about legitimation. They don’t encompass everything, in the cases that are maybe more difficult or the parties are more difficult, then that’s when each one, the custody, visitation, and the legitimation issues might have to be addressed. The complexities of that particular area legitimation or custody would need to be addressed separately and delved into it.

MM: All right. Okay. Well, thank you, Dominic. I appreciate your time today.

DJ: All right. I appreciate it.

To learn more about the legitimation process or to discuss a potential claim, contact our Atlanta area divorce and family law attorneys today.